Divide energy of writing use cases into 4 stages of precision, according to the amount of energy required and the value of pausing after each stage.


** Excerpts from writing effective use cases by Alistair Cockburn.
Posted by Biswajit at 2:14 PM No comments:

"Dadubhai, bolo to manipurer rajdhani ki?" ( Dadubhai, can you tell me what is the capital of Manipur?) ; bolo to india te kotogulo state ache? ( tell me number of States in India).
This is how I would sit with my Dadubhai after he came back from Office. I used to sit with him for hours. He would speak on diverse topics such has academics, general knowlegde, politics and would talk about virtues of life. In summer vacation I used to go to his place and spend a substantial time with him. Although I could not and can not adopt all the good qualities that my dadubhai had, whatever I learned from him would influence my character and life to a great extent.

An epitome  of simplicity, integrity and impeccable honesty - my dadubhai was a strong man. He believed in his principles and followed throughout his life. He never compromised his integrity, never stooped before the society. Considering the fact that he worked as an officer in BDO (Block Development Office), could have made a fortune had he taken any wrong path. Many a times he was offered bribe by many people in order to get things done;however, he never deviated from his principle and did not accept a single favor from any one. He used to tell me how people wanted to get the work done and how he declined the offer. He used to take pride in his action. Probably that is what strikes me most.

In childhood, consciously or unconsciously we tend to be close with the person who has a special connection with the child. As the child grows, the bond with this person leaves an everlasting footprints in child's future. So was the case with my Dadubhai and me. He is no more with me but, his teachings and his blessings will always be an integral part of my life.
Posted by Biswajit at 6:46 PM No comments:

Excerpts from the mouth of a Great monk!!

"I am proud to belong to a religion which has taught the world both tolerance and universal acceptance. We believe not only in universal tolerance, but we accept all religions as true..I am proud to belong to a nation which has sheltered the persecuted and the refegees of all religions and all nations of the earth...I am proud to tell you that we have gathered in our bosom the purest remnants of the Israelistes, who came to Southern India and took refuge with us in the very yearin which their holy temple was shattered to pieces by Roman tyranny...I am proud to belong to the religion which has sheltered and still fostering the remnants of grand Zoroastrian nation...I will quote to you, brethren, a few lines from hymn which I remember to have repeated from my earliest boyhood, which is every day repeated by millions of human beings: As the different streams having their different paths which men take through different tendencies, various though they appear, crooked or straight, all lead to Thee...whosoever come to Me, through whichever form, I reach him; all men are struggling through paths which in the end lead to me.'

Swami Vivekanada - The man, who embraced American people as brothers and Sisters. Those words, that shook Amricans on World Parliament of Religions.
And it was on 9/11.
Posted by Biswajit at 1:22 PM No comments:

Gender inequality is perhaps the biggest setback of otherwise good looking 2011 census of India.
It may not have drawn similar media attention as compared to population, literacy etc. But ever increasing offset of male-Female ratio deserves a serious study and discussion among the policy makers of country. It is one of the biggest social threats to modern India. The natural dislike for a girl child has the potential to bankrupt the morality of a family, of a society, of a village and eventually of the country.

We call our country as MOTHER India, worship goddess Durga , Lakshmi, Saraswati and many more, We take a holy dip at the lap of mother Ganges and still console ourselves when baby girl born in the family. The country has marched forward by abolishing disgusting religious rituals like SATI, bal vivah (child marriage) etc. It is trying to come out of ever practiced discriminations against women by introducing laws on many fronts. Yet it has been witnessing the heinous and unpardonable crime against female – Murder even before she is born.

Where are we going wrong? Is this our culture? Poverty? Illiteracy? Or something else? Although poverty and illiteracy do have a role to play, in my opinion, is not the root cause of this social cancer. Poverty and hunger stricken poor give a damn about the gender of the child. Poverty and illiteracy may be the biggest reason for population crisis, but may not be for the gender inequality. It is the fair earning middle class of India who are victim and culprit of this disease. The sex ration has fallen very sharply in states like Punjab, Haryana, Gujarat and Maharashtra, which are among the richer Indian States. Today's middle class is caught in the web of the vicious social system where a girl is still considered as a burden of the family until she is married. Although we have almost abolished the dowry system which used to be the main reason for not wanting to have a girl child, the desire to spend a lot of money to maintain the social status is the modern form of dowry. As soon as a girl child is born, parents start saving for her wedding.
In my opinion, if every family starts imparting a good education, if every parent strives for a dependent, self sufficient daughter, things will automatically take a U turn from where we are heading right now. Most families do not look investments on their daughter's education as a profitable affair. For many parents, cost of daughter's education does not fetch any return in future. If money spent on a boy child is an investment for a secure future of his family, money spent on a girl is an investment not only for her future, but for her family, society and the whole country.

Many studies have been conducted for gender bias in India. Factors, like economical, social, religious, biological, traditional, cultural and many more have been attributed for insatiable desire to have a boy child. Surely, the analysis of such analysis and researches throws the dark reality of the situation. But is time to act now. Let’s stop pink fading to white. Let’s stop blue become black
Posted by Biswajit at 7:44 PM No comments:

One of my friends commented on facebook – “Ppl in our japan office walked long miles to reach home as train n all transport r closed!!!! At office, They r planning to clean up the wreckage n mess in the weekends...” This simply blows my mind off. These people have not learnt to buckle down in any circumstances. They simply throw a challenge to test their resilience, perseverance and dedication. We call them workaholic, but the work ethic is ingrained in their blood. That’s how they built a developed Japan, almost out of nothing. Japanese don’t work for themselves, rather work for the country.

The rise of Japan post World War II is true example of their determination of building the country. A country with no natural resources, vulnerable to frequent volcanic eruption and earthquake, war torn and savaged after World War II faced lots of economical and political challenges after the war. 1973 oil crisis was yet another shock to the country which was highly depended on the oil. Yet it is the strong will of the people, high work ethics and principle that have made Japan what it is today.

Having seen so many disasters and having successfully overcome them, I feel this Tsunami is yet another challenge. As always in past, they are ready to embrace and come out of it stronger and more prepared.

After all Japan teaches us never say never again. God bless the country.
Posted by Biswajit at 11:46 AM No comments:

Last week end we moved to a new apartment. This place is closer to Boston. Although my travel time has gone up significantly, I feel good for my wife, whose commute time has lessen from humongous 2 hours to 45-50 mins one way.

Looking back, I realize that I have lived in quite a few places in and outside India. Though some of my close friends may not buy this statement and blame me for sticking my ass in a place for ever, from my reference, I have lived in several places. May be I would have been living in many more places, had I not found my love in the city of Pune.

Keep moving, wherever your job takes you to. It is the demand of new workforce in a flat world. You never know where you would be working next month. Earlier, shifting a city didn’t seem to bother much, leave aside shifting a place. On the contrary, moving to new place used to make me excited. Dump all your clothes and other belongings in a bag, move on to a new place. If something is not worth taking along, leave it. However, post marriage shifting a house is becoming a torturous thing to do. What used to be a wake up, pack up and go to a new place, is now keep on awaking, keep on packing and don’t yet ready to go. What keeps you awake? - so many things to consider, so many options to weigh out, so many trade offs to make. What keeps me on packing? Well, Post marriage - this is quite obvious.
Although it’s only me and my wife, I can visualize why people look to settle down after having a family. Age is merely an excuse.
Posted by Biswajit at 12:16 PM 1 comment: 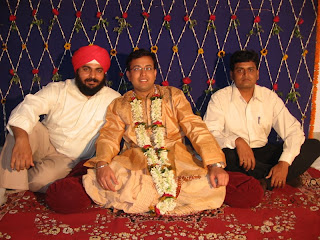 Time spent with good friends is always a precious possession. It is something that you can always cherish and enjoy. No matter where you are, what you do – your memory is always with you. I was lucky to have some good friends in my college. Out of many good friends, some friends are meant for ever. Ours is one of such. Dalprit, Himanshu and Biswajit - the tripod of our everlasting friendship.

We had some fun memories in IIT KGP. Some of them are really funny and worth sharing.One of such incidents that come to my mind immediately is, making Himanshu and Mahesh Jha run 2.2 after making them drunk. We pretended to participate in the race and elevated Himanshu’s enthusiasm to win the race. The common word for doing such act was ‘Tempo high karna’. It was our (Dallu and I) ploy to make Himanshu run. We all got ready. 3…2….1… and we all started running. After few yards, dallu and I stepped back. Himanshu’s fuel tank was already full (with?) and he ran like a jet in high throttle ready to take off. Dallu and I reached the end point from the other side. Basically it was circular track (total length of 2.2 km and hence the name 2.2). While we were resting and having some chit-chat, Himanshu was approaching the finish line. We could not resist our laughter. A drunken cheated Himanshu did not take it easily and poured his anger with all sorts of desi gaaali. Applaud on his commendable win didn’t seem to pacify his anger. He didn’t even realize his co-runner had also stepped back midway....:-) ( to be continued....)
Posted by Biswajit at 6:05 PM No comments: